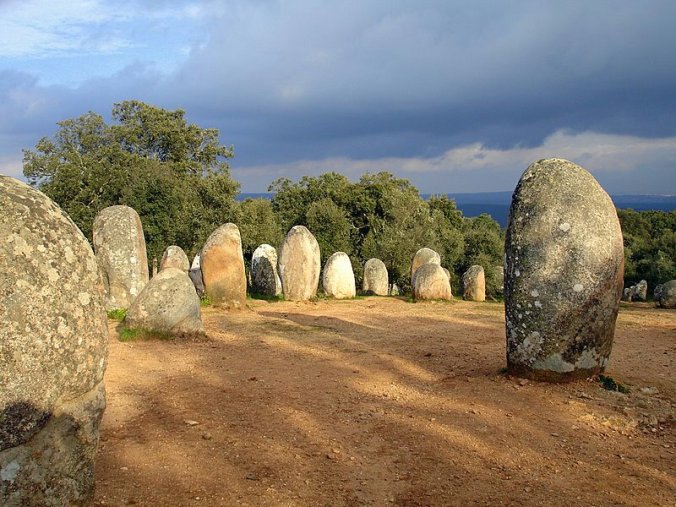 I live in a country full of ancient spiritual experiences. The place i live is full of those remains and has a lot of energy power. Even the name of the town comes from an ancient Goddess and there are several legends about her and the name that relates with the moon and the sun.The ancient Spiritual culture in Portugal consisted mainly on rituals of Sun and Moon cults. Although ancient people also worship animals, plants and made cults about death. There are lots of ruins and objects related to those old rituals all over the country. The Moon was related to the Goddess cult and the Sun was considered to be the mail aspect of the divine as the Lord of nature with its heat and light promoted life and health. The Sun and the Moon were at the top of all rituals and were responsible for the crops and fertility so they assured the survival of the human species.
High places and the cult of big rocks were the preference for Moon and Sun cults. Just like “Stonehenge”, in Portugal we see several examples of cults worshiping the stars and they were made using the knowledge of planetary alignments at summer and winter solstice and equinoxes and at those dates special rituals were made.
At the full Moon and New Moon rituals and dance as well as animal sacrifices were made to the Moon and also to Saturn. We have remains of ancient temples dedicated both to the Sun and the Moon, and other temples only to the Sun or the Moon.
There were temples that beside worship the Sun or the Moon were used to other Gods or Goddesses, as an example, the people could make special rituals to the Gods of the mountain or the water, depending of their geographic conditions. We have several historical profs of the variety of cults. However they all respected nature and stars and used to make offers to the entities so life could be fertile and both Gods and Goddesses provided fertile crops and health for everyone.
Besides the survival aspect, we observe a lot of knowledge of the celestial world, of the invisible energies and the occult. They seemed to know what they did very well. There were Priests and Priestesses respected for their knowledge and powers given to them by the God and Goddess. They knew magic and used plants as medicine and as hallucinogenic to make the rituals.
Throughout millenniums all the tribes that came here seemed to have similar cults and they all add more wisdom and combined spiritual cultures. As an example, the Celtics.
Ancient “portuguese” had special Gods and Goddesses which they believed were on the stars. The first 4 deities were: ARENCIA warrior goddess, she represented victory. ARENCIO was ARENCIA husband and he was the God of war. He represented strength. QUANGEIO was the creator and protector of animals. TREBARUNA was the goddess that protected warriors, family, and house.

AUTHOR: MARIA JOSÉ ABELHO ANTUNES. ALL RIGHTS RESERVED. IF YOU WANT HEALING AND GUIDANCE SESSIONS OR TO BECOME MY SPIRITUAL STUDENT CONTACT ME AT: mariajoseantunes66@gmail.com . Check “contact” page https://mariajoseabelho.wordpress.com/contact/

HELP US CONTINUE OUR WORK, THANK YOU:

LOVING GREETINGS, I AM A METAPHYSICAL SPIRITUAL HOLISTIC TEACHER AND HEALER, CHANNELER, BOOK AUTHOR, BRINGER OF LIGHT AND MOST OF ALL A LOVER! I AM HERE TO HELP YOU AND GAIA TO ACHIEVE PURE LOVE AND PEACE WITHOUT ANY JUDGMENTS!